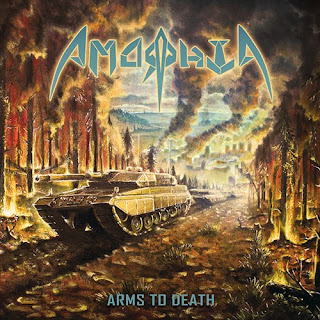 I didn’t know Tom Angelripper from SODOM had a little brother in India! He doesn’t? Well, it sure sounds like Tom or somebody in his family is roaring away in Indian thrash band AMORPHIA!

SODOM is the absolute best comparison you can make to this 3-piece. They have the raw, uncomplicated sound of Angelripper’s boys around the time of “Tapping The Vein” or “M-16”. This is basic, unvarnished thrash...maybe sometimes a little too basic, but it packs a punch and these dudes are not interested in showcasing technical abilities...just pure brute force.

Simple song titles like “Nuclear Warfare”, “Toxic Death” and “Army of Evil” hearken back to the glory days. Although SODOM is the primary influence, AMORPHIA also remind me of ASSASSIN and EXUMER as well. As much as I like their blunt attack, I think maybe they should add a couple of extra frills in the future. Also, AMORPHIA is NOT a good name for a band. Too much easy confusion with Finland’s AMORPHIS, who sound very little like this.

Nevertheless, if you dig war-like German thrash of old, “Arms To Death” should be put squarely in your crosshairs!