RASPBERRY BULBS "Before the Age of Mirrors" 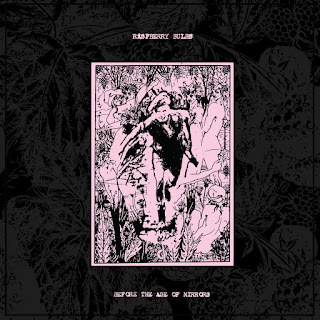 "Before the Age of Mirrors"

What manner of band could RASPBERRY BULBS be? Acid-drenched psychedelia? Dreamy retro pop? Electro-synth? None of the above. This oddly named ensemble label themselves as an "occult punk band" with black metal and cinematic influences. Hallelujah! Something new and different at last!

To be honest, I don't get much of a black metal vibe out of this, with the exception of lyrics, which are said to be Lovecraftian in nature. That, too, intrigues me, because the only other truly Lovecraftian punk band was the legendary and ground-breaking RUDIMENTARY PENI. And yes, indeed, the BULBS are channeling the spirit of that strange band here. The sound is extremely raw and roughly produced, with plenty of grit and fuzzy edges. Everything here is blurred and basic. The riffs are pretty easy to process, a mixture of straight up punk, early 90's noise rock and even elder age SABBATH and STOOGES. In addition to 8 churning tunes of darkened eldritch punk, we get four "interludes" where RASPBERRY BULBS get to show their experimental side by creating unsettling soundscapes. A lot of time such interludes are time wasters, but these are genuinely interesting and intriguing. Each has a vastly different feel, as well.

Although the music here is not in my usual wheelhouse, it is something different than the norm and gives a different slant to horror-influenced music. Label mates DEVIL MASTER are doing the same thing in a completely divergent fashion. I'd say RASPBERRY BULBS are well worth tasting if you like raw and outre music.