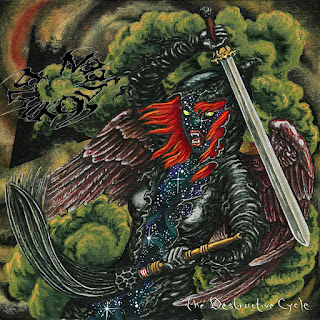 I first encountered blackQUEEN five years or so ago, with their album "March of the Obsidian Triumvirate" and made note that they were one strange outfit that was impossible to put a steady finger on. I'm glad to see that hasn't changed on "The Destructive Cycle". Thank God for bands that have their own sound and who are not afraid to mess with the listener!

"The Destructive Cycle" is altogether heavier and more aggressive than "March..." was but that doesn't mean the quirk factor has diminished. The six songs here are impossible to plot or predict, veering from crazed tech-death to thundering doom to creepy post-punk soundscapes. Each one lurches around like a mental patient who just got a triple dose of thorazine yet the end result is compelling and fascinating. The title track is a two and half minute blast of crusty CONVERGE style hardcore, but next track "Feed The Worm" is longer, gloomier and more spastic. The production here is super organic and natural and the vocals are absolutely all over the map, from grunty growls to somber BAUHAUS style moans to shrieking rasps and even something akin to GHOST's Gregorian chants. There's also a great use of keys and synth to enhance the heaviness and add a sort of mock-Gothic flavor.

The band really lets their freak flag fly with the last two cuts, "The Calefactorum Occulta" and "The Sorcerer's Jian", which also happen to be the longest. These aren't just songs, they're adventures where you don't know what's coming next. But despite the eclectic nature, they DO hold together as songs and never get so crazy you lose your grip on them.

blackQUEEN are a hidden treasure in today's easy to pigeonhole music scene. People who like their music raw, heavy and unpredictable have got to check this out!