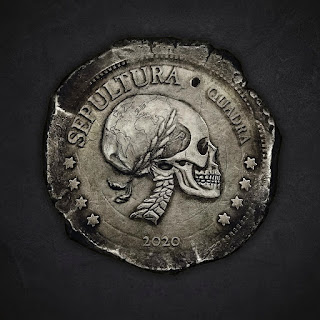 Few bands are more frustrating to analyze than modern day SEPULTURA. They’re always on the edge of a major breakthrough but never seen to make it. They are at the nexus where ambition meets pretension and it’s hard to tell who’s going to win at any time.

I’ve always been someone willing to give the Cavalera-less band a good chance. And for the last few albums, flashes of brilliance are there. So is some really banal groove-thrash. Last album “Machine Messiah” seemed like a disorganized mess where they reached too far past where they should have. I’m glad to say “Quadra” is a big step above that. In fact, this albums starts like a scorcher. But at the end, the bottom drops out and what could have been great is merely good.

“Quadra”, like much of the last 15 years of SEPULTURA, dabbles with cinematic soundscapes and ethnic influences while still trying to deliver aggressive metal. “Isolation” starts with a gradual buildup utilizing synth and orchestral tunes before taking off with some screaming thrash. I’ll say it again, this band does not miss Igor Cavalera in the least...replacement drummer Eloy Casagrande is capable of everything Igor could do and more. The percussion here is a pleasure to hear. “Means To An End” is another fast and aggressive tune. I like the mid-paced crunch of “Ali” and “Autem” features some really cool vocal hooks.

Experimentation sometimes works for this band...and sometimes blows up in its face. “Guardians of Earth” is a kind of “Roots” leaning tune with strong ethnic elements…it takes a while to catch on, but is not bad. “The Pentagram” is a progressive sounding instrumental with great soloing from Kisser. But the album closes badly as the last two cuts “Agony of Defeat” and especially “Fear Pain Chaos Suffering” come across as boring, overproduced and not too heavy. The female vocals and lukewarm pace of the latter is particularly weak considering the song title leads you to expect something explosive.

So “Quadra” has some really strong elements going for it, but once again, it falls short of moving SEPULTURA to the level they can attain. Those who abandoned them after Max’s departure (and in some cases, long before) certainly won’t change their opinion after this...those who stuck with them will continue to do so. This is a lateral move for the band.