CHRONICLES OF HATE "The Birth of Hate" 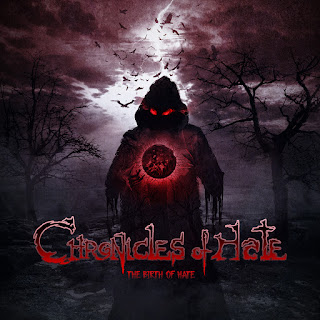 “The Birth of Hate”

“The Birth of Hate” is not going to revolutionize the metal business or send pundits racing to their keyboards to shower praise on it, but there is something so down to earth and steady in how this record works that it’s impossible to dislike. This Italian band just roll up their sleeves and dive into an album of chugging melodic death metal that gets the job done.

The album is the epitome of just getting right to business. There’s no symphonic instruments, female opera singers or complicated riffery.  Instead, there’s 9 songs and a little over a half hour of raw and catchy metal that will help you get through the day or maybe make a long, boring drive a little more bearable. Songs are short and to the point. The band is compared to At The Gates and In Flames, but they are not as transcendent as the former or as lame as the latter. The songs are remarkably uniform without sounding monotonous...there’s just enough difference between them to keep them  from turning into a mush. The musicianship is nothing to really grab your interest, but there’s no glaring holes in their playing either.

Hard to pick out a particular track, but the super crunchy “A Better Way” and the rolling, rumbling “Hope Kills” were the most enjoyable for me. The whole album flies by and I don’t know if you will remember much about it in a month, but it’s solid extreme metal that holds your attention while you listen to it.