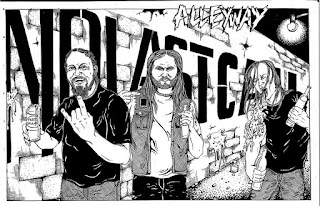 This Oshkosh, WI band is pretty active in the area, but due to bad timing, I’ve never been able to see them live. I hope to remedy that soon, because I’m guessing that’s where they’re at their best. This is raw and raucous metallized rock that can appeal to metalheads, punks and probably even folks that just like straight up rock and roll.

It’s very simple and straightforward stuff. Compact songs loaded with gasoline, fast riffs, whiskey guzzling vocals and easy hooks. Sometimes they have a speed metal feel like the awesome opener “Live Wild Now” and “Snake Eyes”, where they almost have an EXCITER type sound, but sometimes they are pure punky speed rock ala ZEKE and SPEEDWOLF on songs such as the title track and “Sorrento Nites”. The ghost of old MOTORHEAD also hangs over ALLEYWAY and if I’m not mistaken, there’s even some rockabilly influence on a couple of tunes.

I don’t expect ALLEYWAY to be winning an Emmy anytime soon, but I’m sure they could give a rat’s ass. This is Saturday night drinking, fighting and fucking music!