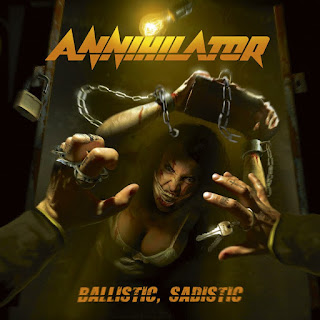 Is it too late for ANNIHILATOR to jump back to the top of the thrash heap? After hearing "Ballistic, Sadistic", I'd say, hell no! Jeff Waters and his band have had some ups and downs over the years (and I would argue more ups than downs) but after hearing this scorcher, I defy anyone to tell me they still don't have the goods.

"Smooth" and "sharp" are two words I think of when the name ANNIHILATOR is mentioned. Jeff Waters has just got the magic touch when it comes to killer technical thrash and "Ballistic, Sadistic" proves it.  This band is just so tight! You can zero in on any of the ten tracks here and hear some amazing playing, not just from Jeff but from every member of the band. The sound is familiar but comfortably so and with the opening barrage of "Armed To The Teeth", you know you're in good hands. "The Attitude" has plenty of the title subject, "Psycho Ward" is the kind of hook-laden thrash ANNIHILATOR mastered on its first two albums, but for me it's "Out With The Garbage" and "Dressed Up For Evil" where the band shows its mastery. Fast and angry, but with awesome riff transitions and jaw-dropping lead work, these two tracks rank with the best ANNIHILATOR has ever done.