EIGHTY ONE HUNDRED "Heaven In Flames" 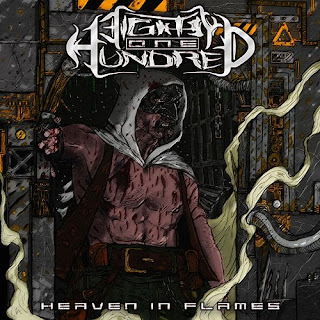 A band called EIGHTY ONE HUNDRED could be any kind of music at all, from pop punk to electro. I rather like that kind of ambiguity. What we have here is a very fresh sounding melodic metal band that tweaks their sound just enough to keep things from getting dull. Power metal and melodic hard rock fans should really dig this, as the band straddles the fence between those styles with a very deft hand. I would also say fans of GAMMA RAY need to check this out.

The style is quite metallic but the melodies prevail over all. There's a Euro power metal feel, but the band often pulls back and executes some cool time and mood changes at unexpected times. The title track and "Cry Out" mutate and evolve over the length. The singing voice of Screamer is pretty nasal and high pitched but doesn't go past the point where it becomes annoying. "Payback: My Time"  and "Mater Gaia" are longer songs that steadily build in intensity while "No Way Out" is a headbanger from the word go, like an IRON SAVIOR track. The final song "Power of Revolution" is more of a slow grinder, but maybe a bit more memorable because of that.

EIGHTY ONE HUNDRED have delivered something that's familiar but just a little different at the same time. This is a melodic metal band to watch for...