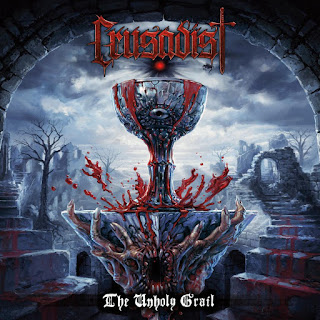 Add CRUSADIST to the list of no bullshit metal bands from Chicago. I never heard of them before “The Unholy Grail” but from now on, I will keep an eye (and ear) out for them. This is a strong debut.

They lean towards the extreme side of the scale and remind me most readily of GOATWHORE with their attack that combines death, thrash and black metal into a war-like attack. There’s even a touch of the sludgy brutality of fellow Chi-town terrorists CIANIDE on “For Blood and Conquest”. I can’t say there’s anything blindingly original here, but the band is tight and keeps their focus narrow. Best cut for me would be “Tempered In Black Flame”, which starts out with a familiar kind of sound but which soon cuts loose with a shifting assault of powerful, raw riffs. “Triumph Through Torture” is an odd instrumental that leads into a withering death metal blast on “Beyond the Count of Grief”, the fastest cut here. There’s also an emphasis on classic lead soloing, especially on “The Noble Savage”, which has some very tasty fretwork.